With so many horror movies devoted to the dark side of the holiday season (Halloween, My Bloody Valentine, Silent Night, Deadly Night, and so on), it’s not surprising that indie filmmakers would eventually turn to political occasions for a tale of zombie-inspired slasher fun. Directed by David Zuckerman, Presidents Day (yes, the missing apostrophe is intentional…I think) is a low-budget hybrid of horror and comedy that, despite a few genuine laughs, runs out of steam quickly and suffers from a juvenile and uninspired script. The cast—including Monica Ricketts, Jud Zumwalt, Dax Hill, Josh Nasar, and Brittany Faith Rosoff—really give it their all, embracing the film’s absurdity and clearly having a great time along the way. Many of the scenes are delightfully manic and feature a handful of funny one-liners. The cinematography, though not necessarily a stand-out, is more than capable and the musical score delivers a few suspenseful jolts here and there. But these highlights are not enough to save what could have been an insightful political farce with a horrific edge. 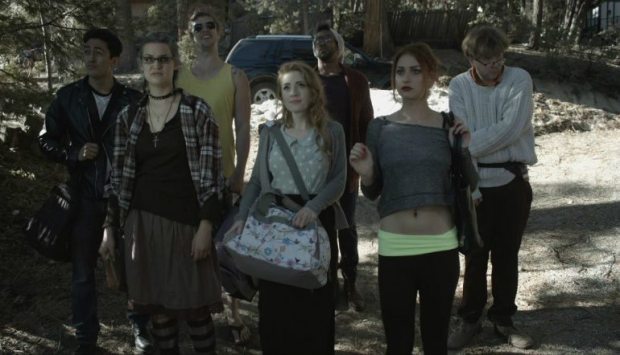 In full-blown satire mode, Presidents Day focuses on all the traditional characters from the horror genre—we have the annoying jock, his sultry girlfriend who flirts with just about everyone, a goofy nerd, an African-American student, a bespectacled quiet girl, a greaser, and a beautiful virgin. The introduction of the characters is fast and quirky, and the group is a fairly likable bunch (though the jock shouts every line in an exaggerated “surfer voice,” the humorous appeal of which quickly wears off). The motley group travels to a run-down vacation cabin to celebrate President’s Day and it is in that tired setting that a gang of undead presidents rise from their graves and wreak havoc on our heroes. What follows is a poorly-edited string of predictable slayings and other generic scenes, each one made lackluster by the limited make-up, practical, and digital effects. While Presidents Day maintains the spirit of many cheap and tacky movies that have come before it, it’s just not a very good film—the storyline, the pacing, and the kill scenes all leave much to be desired. The opening scenes do contain a few spot-on jokes and gags, and the premise of dead presidents (among them, Kennedy, Polk, and Booth) returning to life to kill obnoxious teens has promise, but the film fails to sustain its early momentum and begins to fall flat after about the 30-minute mark. With traces of The Evil Dead and The Cabin in the Woods, Zuckerman’s movie makes no qualms about its influences–and that’s a good thing. It’s entertaining to see bits and pieces of earlier films in this send-up of B-movie madness. But with a plot that never seems fully realized, Presidents Day struggles to stand on its own merit.

For a night of campy silliness, Presidents Day is worth the 90-minutes (and the film might have made more sense as a short, considering the truncated plot). Zuckerman directs with energy and has encouraged his cast of young, comedic talent to tackle their limited roles with gusto. In the future, it would be exciting to see what this talented group of filmmakers could do with a slightly higher budget, a smarter concept, and a sharper script. 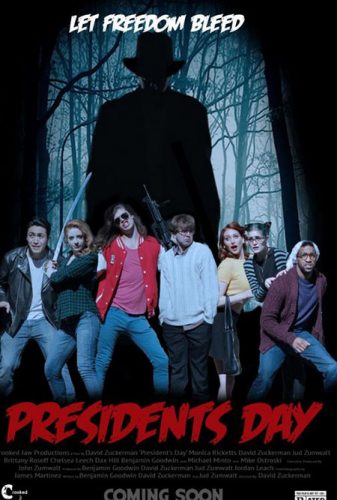